Michelin introduced Kafka back in 2018 with some on-premises clusters.

In my previous article, I shared how Kafka helped Michelin to learn distributed architectures as well as the complexities and difficulties we faced when managing these Kafka clusters.

In this article I would like to explain how we migrated all our data, producers, consumers and Kafka stream applications from our on-premise cluster to Confluent cloud, a solution hosted in Microsfot Azure and managed by Confluent.

Why did we do this choice

If you have already managed a cluster Kafka, you already know that it is not a simple story. At Michelin, our strategy is to have a corporate Kafka cluster to manage most of our use cases. Most because we have some specifities being an industrial company. For instance, we implemented specific Kafka clusters in our plants and in our sensitive data center.

To manage a cluster, it requires:

And to be honest at Michelin, that's not where we excel. It mainly explains why we decided to leverage as much as possible managed services and Kafka is a perfect candidate. At the end, we were also looking for a better level of service and to reduce run cost significatly.

From several years, we are working with the support of Confluent to manage our central cluster. One of our cloud provider being Microsoft Azure, it was therefore natural to subscribe to Confluent Cloud Plateform in Azure.

The Challenge we face

As I mentioned earlier, we had several Kafka clusters and we decided to migrate the 2 following one:

The existing configuration of the central cluster: (the biggest one)

Our requirements for this migration were high though quite common:

Before starting anything, we had to explain and even convince more than twenty teams to make this migration. We felt that technically, there was little impact, for 70% of our products. The only impact on the code was to modify the properties of the cluster connection chain. We then first worked with the dev teams to identify and confirm the technical impacts.

The most complicated part, as expected, was to coordinate the 25 teams and to put in products' backlogs this technical migration with a high priority so the migration is as quick as possible.

But as in many companies, technicals evolutions are often challenged to the benefit of business evolutions which are considered to have a higher added value. After many discussions, we were finally ready to address the subject...

How to migrate our data?

We envisioned three technical ways to migrate our data from the source cluster to the target one, based on Connectors: 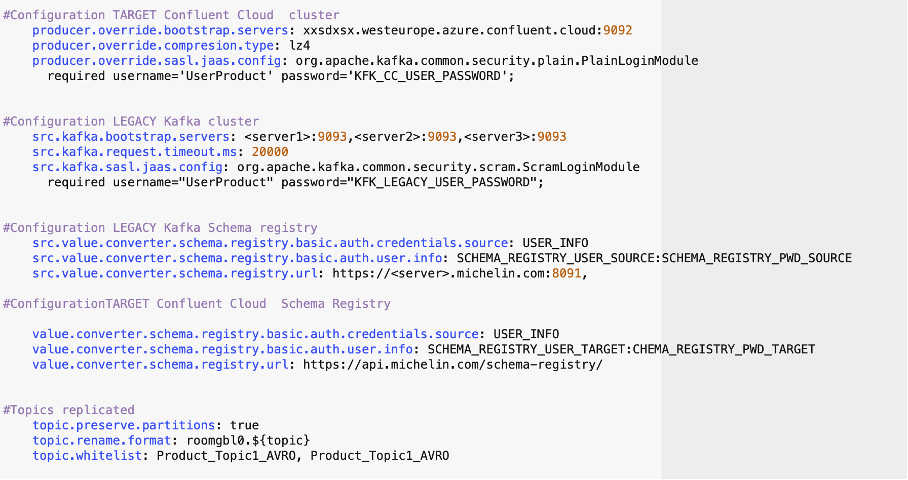 For the data migration of our central cluster, supported by Confluent, we decided to use the connect replicator. But for other clusters, it was not possible. We were not authorized to use replicator, we should use the MM2 with his constraint on schemas.

So, we implement these two solutions for data migration depending on the context.

We can already imagine, in the future, we will need to replicate data between our several clusters and the only way to do that with Kafka cluster not under Confluent licenses is with MM2.

The constraints we had:

We need a centralize schemas registry to have one source of true for the version of our schemas. 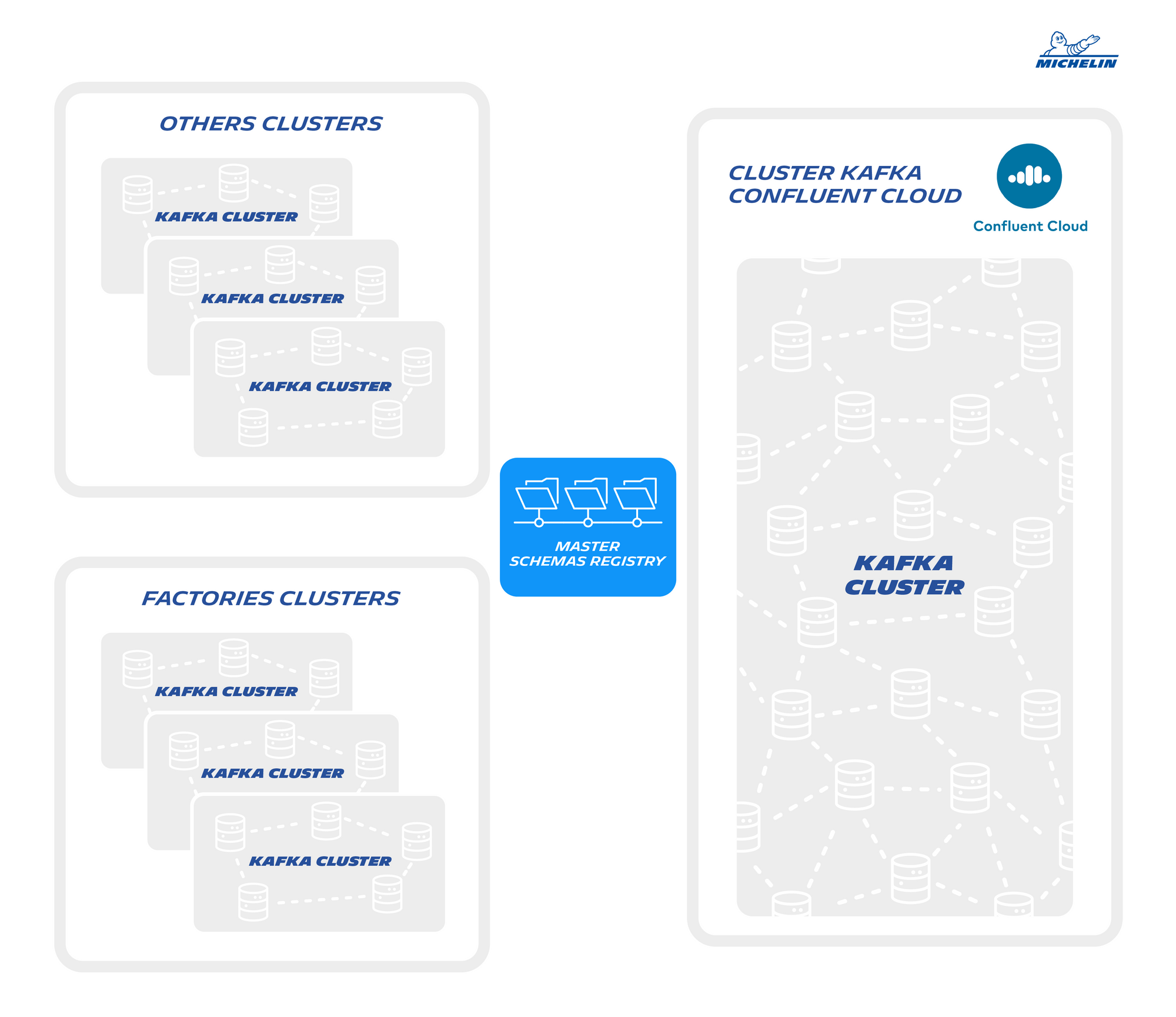 We choose the second option. The registry schema is not critical to produce a message. It's needed only when publishing messages and starting applications!

With this last decision we were ready to migrate

The only constraint not yet managed is about the RBAC and the segregation of access to the schema registry.

Let me introduce few words of the component NS4KFK

Globally teams working with Kafka need to manage their resources themselves:

The teams should be autonomous, but Kafka doesn’t provide a way to isolate teams: when you have access to manage resources, you can manage all resources, not only yours.

Michelin has developed a deployment model for the different Kafka resources following the best practices of Kubernetes. Let’s follow the link it was really Key for us to deploy it, and our migration was the right opportunity to introduce it
https://github.com/michelin/ns4kafka 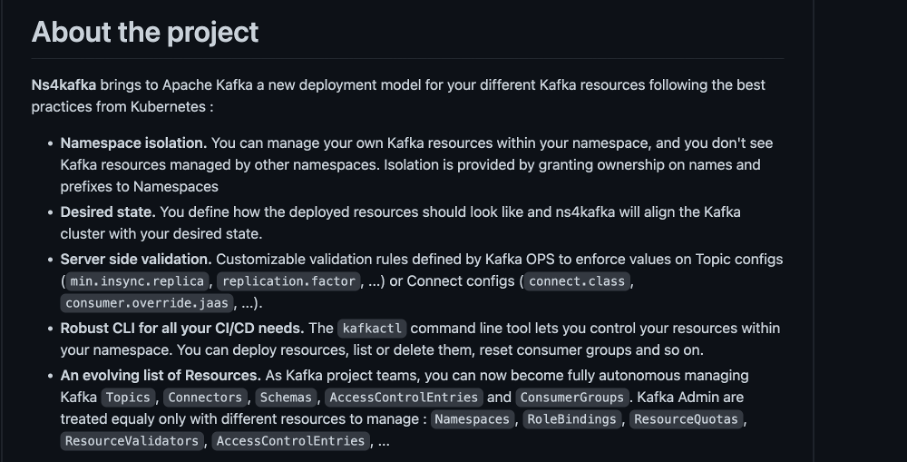 We profit of the migration to Confluent cloud to introduce the tool, I will not enter deeper in detail, let’s read the documentation, but it was mandatory for us to implement this tool to give autonomy to the projects, to secure our future deployment with Kafka., it was adopted by more than 20 projects for the migration!

From now, we know more or less how we will be able to migrate data from one cluster to another.

In which order we have to migrate our products

During our analysis, we decided and tried to group the products by use cases:

But some of projects are included in several groups, we have build a matrix and a table of constraints to define the order we have to respect to migrate.

We have authorized only the replication in one way (from old Cluster Kafka, to the new one), to avoid the spaghetti dish.

For the use cases: “producer/consumer”. 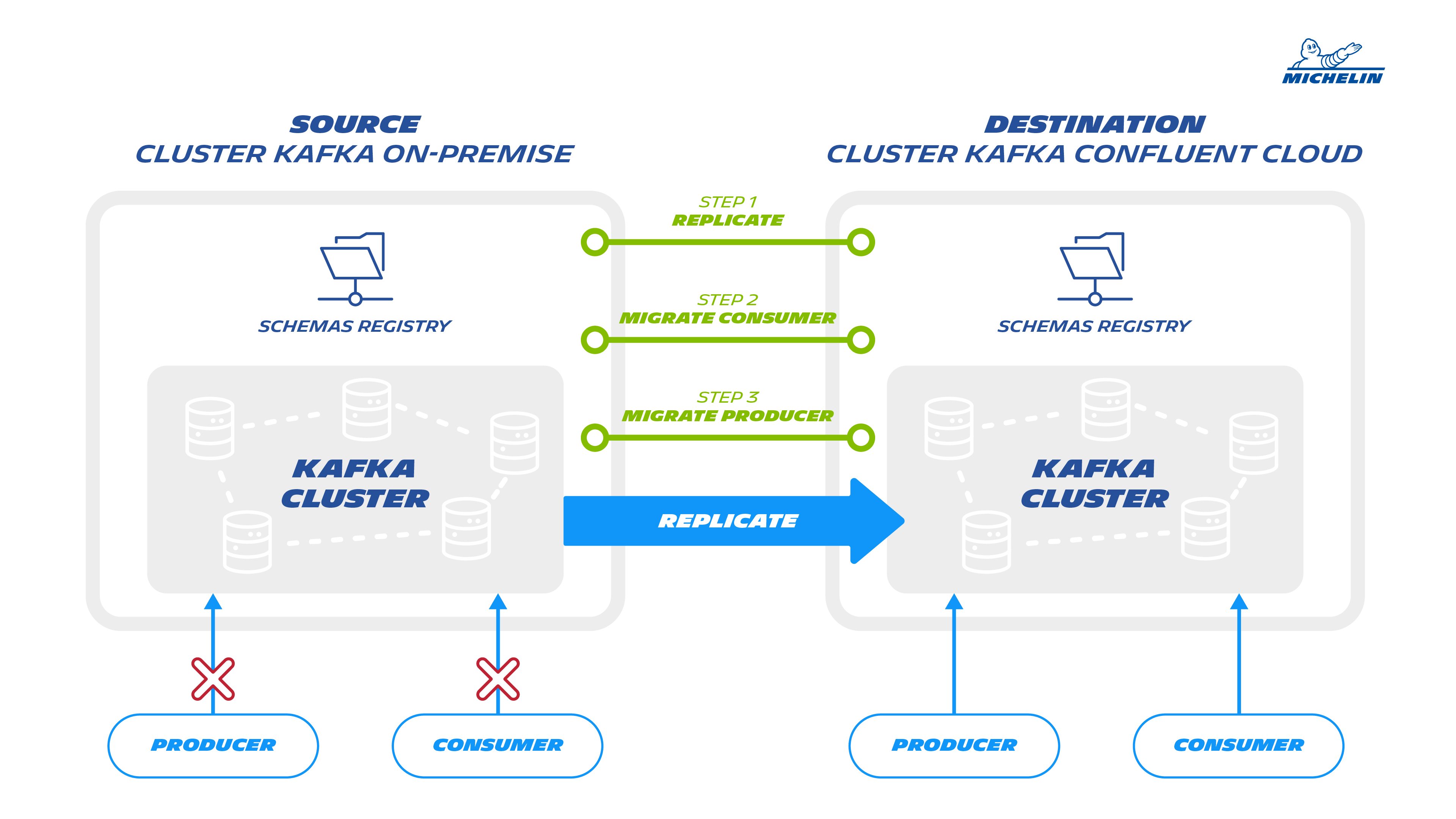 This model has been applied for referential data and transactional data.
For referential data, in our context, no matter to reload the data twice, so the synchronization between consumer and producer was “easy”.
For Transactional data, it introduces some coordination between consumer and producer, to stop the production of data, during the migration of the consumer.

From now, let me explain how we have migrated our most challenging use case....

As I mentioned earlier, the keys constraints of the migration was the downtime and the duplicate data.
For Producer/consumer use cases, no problem, it was manageable easily.

For a Xlarge project kafka Stream, it was more tricky.

One of the team's key challenges was to ensure that data was not duplicated.
This Kafka stream product is fed upstream by products which cannot guarantee us exactly Once, we have sequences which therefore run "normal" duplicates.

During data replication we should not generate duplicates, except with the connect replicator we have no transactional guarantee. Connect sources are not ExactlyOnceSemantic and replicator is a connect source. As described in the schema below, we have to setup the right properties.
Replicator connector is a Consumer and a producer:
1- Consumer part of the replicator will exclude aborted message, to not replicate them in the target topic:
src.kafka.isolation.level: read_committed
2- Producer part of the replicator, will not do any duplicate of data , using producer ID (PID) mecanism:
producer.override.enable.idempotence: true

But it's not enough

What's happened if the consumer part of the replicator is reading several time the same data ? and how could we mitigate the risk ? 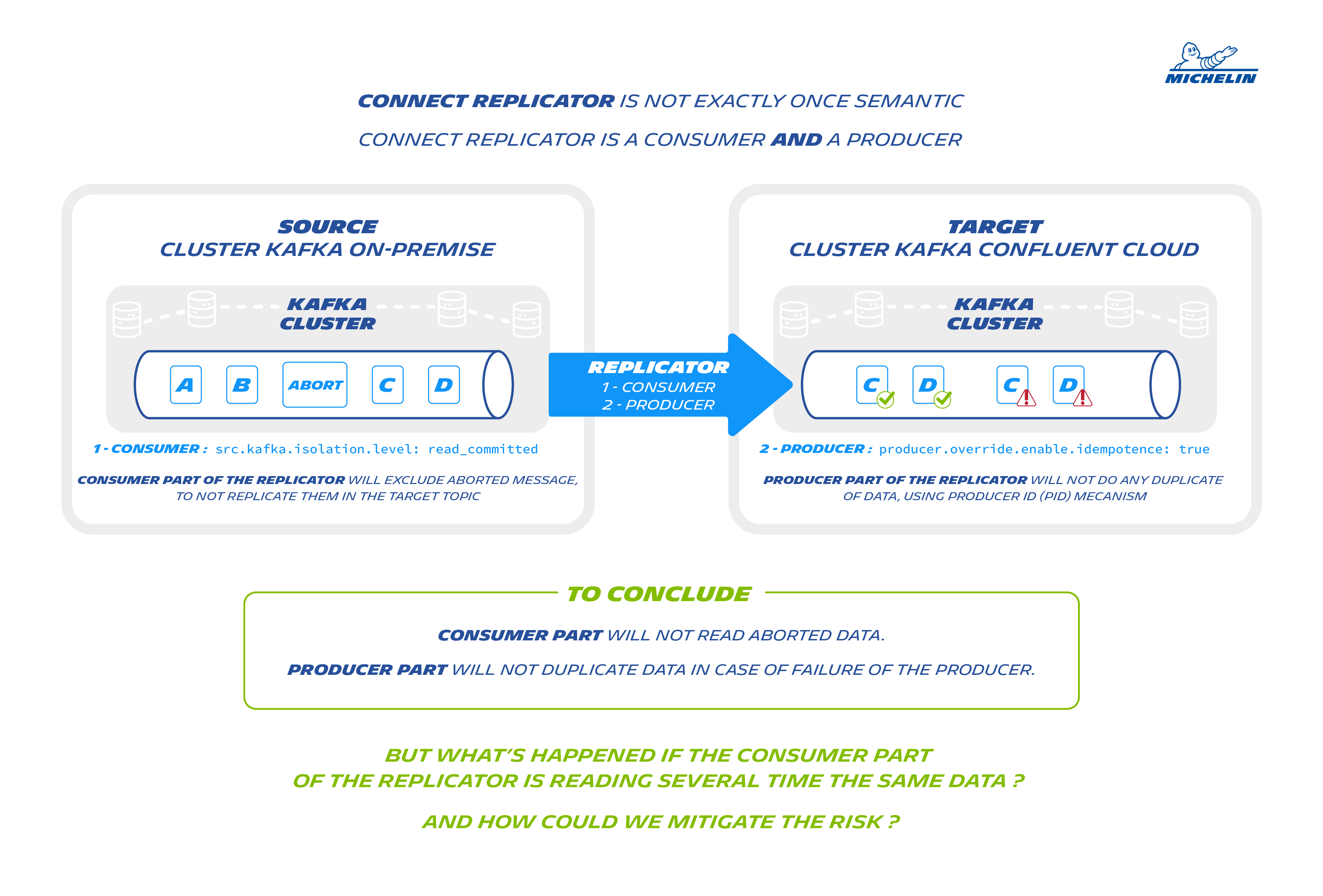 To minimize the risk of technical duplicates during replication, it is necessary to ensure that there is no rebalance on the connect side.
Rebalance can occur due to network latency, and we have bad latency sometimes, the team has decided to reduce the size of the TCP buffers as much as possible during the replication, They have carefully monitored all cases of rebalance detected during the replications. in order to reduce to zero, the cases of technical duplication. (screenshot of our grafana dashboard).

With this tunning and the monitoring , the team have guaranteed integrity of the data.

The strategy to migrate the application is described below: 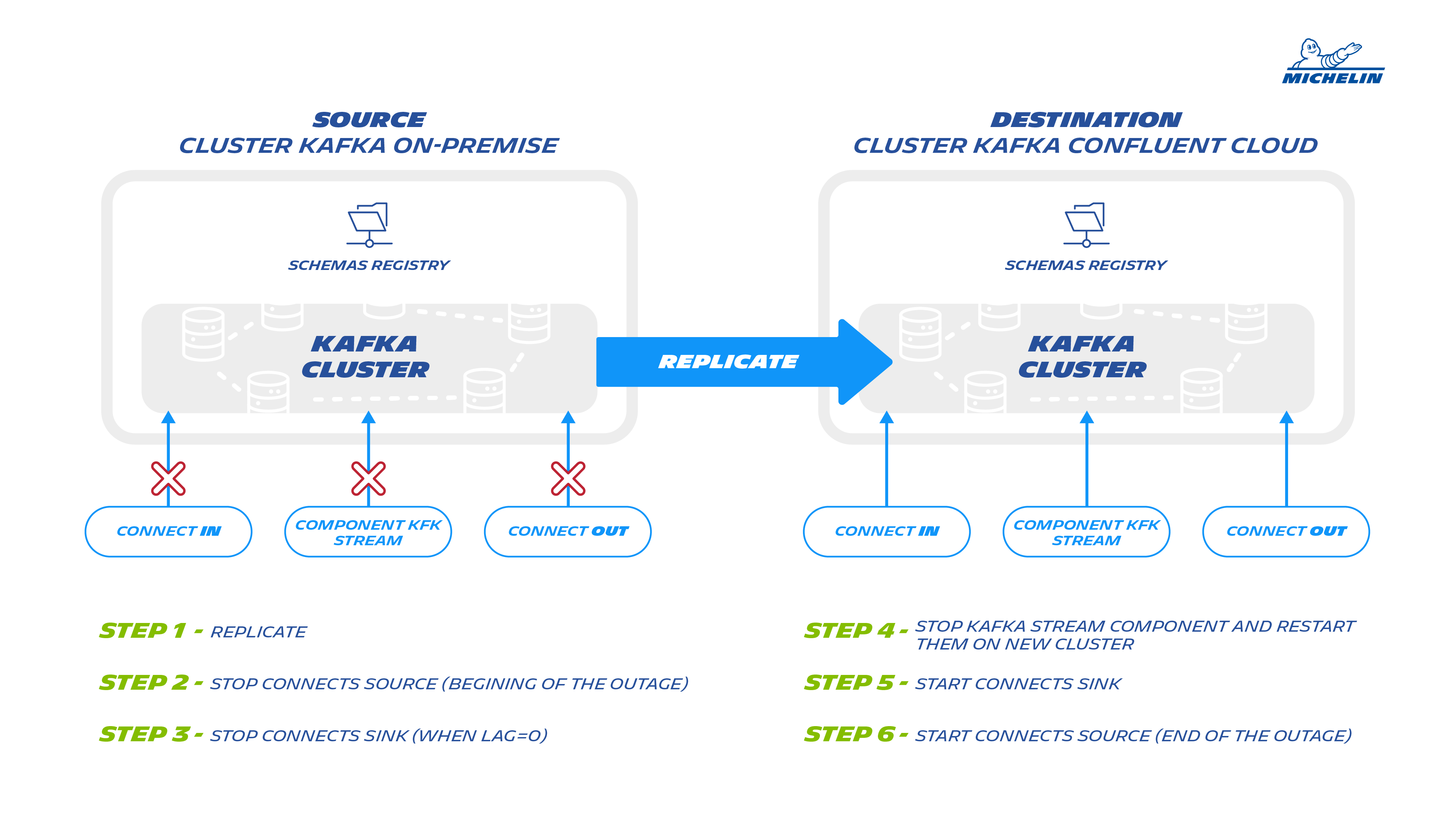 In less of 2 hours of downtime, the team has succeed the migration, but with a huge work of preparation.

I hope this article was interesting for you

From the beginning of the migration on Confluent Cloud, we have no major incident detected (several months). 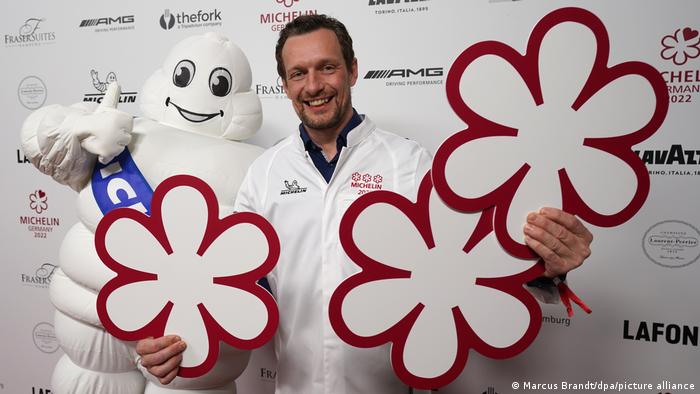 tl;dr content publication is a challenge for an institution like the Michelin guide. Event streaming between SaaS solutions using Kafka hosted in Confluent cloud was a solution for us 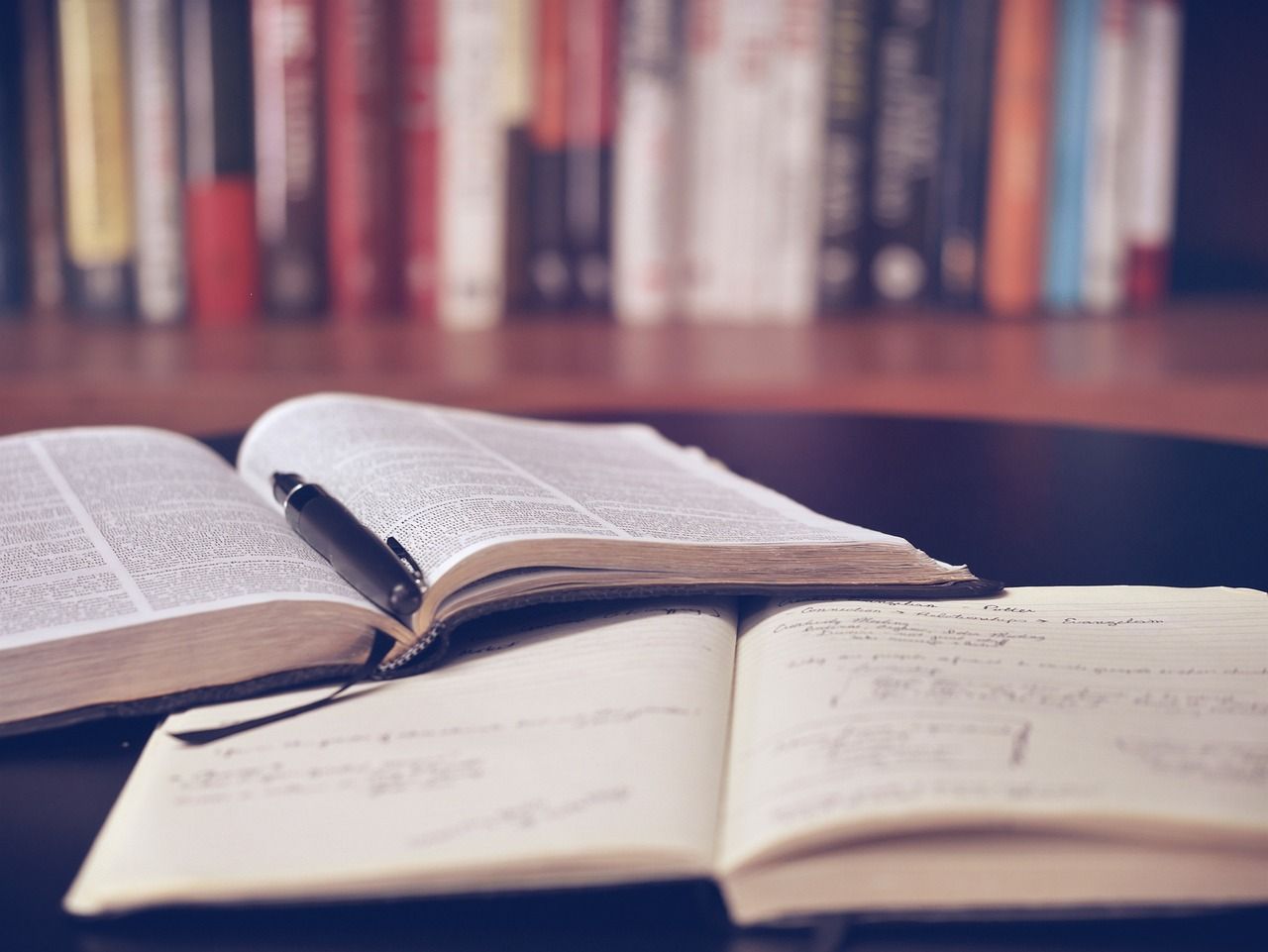 This article discusses part of the journey of IT engineers, creating a framework for themselves with the intention of making it available to non-IT engineers in R&D as well.